Difference between revisions of "ButtonBoxes"

The buttonbox is used for time accurate(1ms) button press registration. We use it to register buttonpresses, soundkey, voicekey signals and to send tone onset, analog output, triggers with the BITSI protocol. It is suitable for Behavioral, EEG, MEG, and fMRI experiments. The buttonbox is connected to a computer with a usb connection.

The output connector has two binary eight bit ports: input and output. The two ports can be used for responses (input) and stimulus triggers (output). Two 12 bits analog outputs and three 12 bits analog inputs. The output connector has a sound and voicekey which triggers when a amplitude reaches a threshold. By using the serial port, the BITSI can be used platform independently: it works on Windows, Linux and Mac OSX. Most programming environments and stimulus packages support serial communication.

There is currently a Microsoft Windows driver issue.

BITSI stands for Bits to Serial Interface. Because the BITSI is designed to interface both in- and output signals, the 'protocol' is asymmetric: the input and output protocols differ.

The input port can be used to interface eight buttons maximally. Button presses are translated to serial output characters/bytes according to the following table:

This means that when signal 1 gets active(button press), a capital A will be sent to the serial port. A lowercase 'a' will be sent when the signal is deactivated(button release). Mechanical buttons can be connected directly.

If no button is pressed when powered it boots the last known protocol. In the simple protocol every byte sent to the BITSI over the serial port, is represented at the 8 bit output.

The extended protocol uses two bytes(or two characters), this combination can access two analog outputs and a tone generator. The first byte selects the output. The second byte determines the value written to this output. 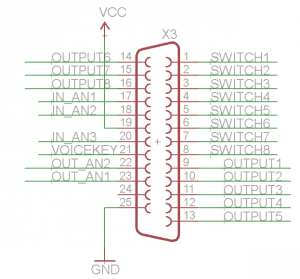 Schematic view of the 25 pins connector

Our hardware design allows to be connected to the computers USB and emulates a serial communication Port.

1.Connect the BITSIbox to your computer using the USB cable.

2.When you connect the BITSIbox, Windows should initiate the driver installation process (if you haven't used the computer with an BITSIbox board before).

3.On Windows Vista/7, the driver should be automatically downloaded and installed.

4.On Windows XP, the Add New Hardware wizard will open:

How to Check the Com Port settings(important!)

Always connect the usb device to the same port and your settings will be remembered.

The experiment files needs a few settings for the device to work: 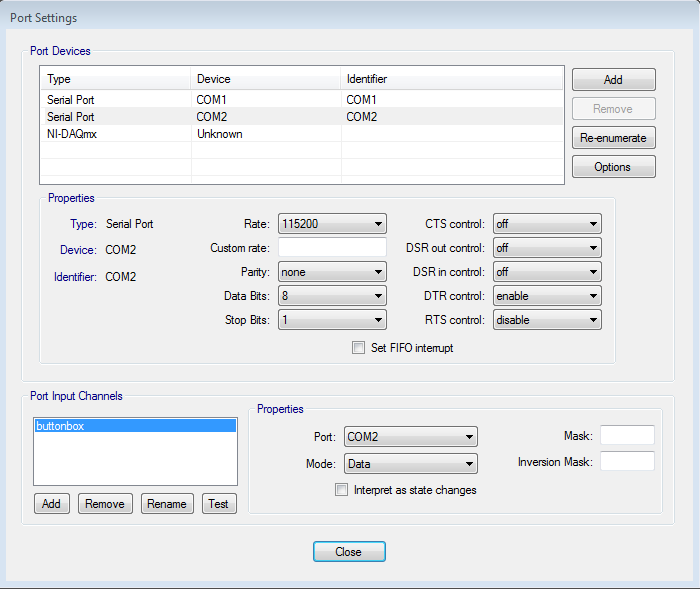 When pressing on the A button within the input channel tester. You will see the following ASCII code.

Send code 1 for Button A

Button A will light up. 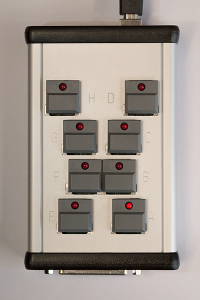 Example PCL code you can program a handle to send a marker:

Example to send a marker:

or use in windows command 'pip install --upgrade rusocsci'

Example using buttons from the buttonbox in Python:

Example using markers with the buttonbox in Python:

Example using the Buttonbox in PsychoPy:

Example using markers with the Buttonbox in Matlab:

Download the file Bitsi.m from the DCCN website: https://intranet.donders.ru.nl/index.php?id=bitsim0
Make sure to have this file in your Matlab path.