In this example, we will show how to create a visual speller in BrainStream.

The visual speller was first described by Farwell and Donchin in 1988 1. A visual speller consists of a matrix which usually contains all the letters of the alphabet. 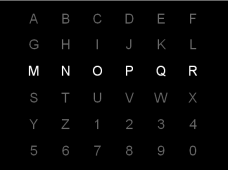 The rows and columns of this matrix are intensified in random order by briefly increasing the luminance of all elements within a row or column, which is perceived as a flash. Subjects are asked to direct their attention to one of the elements of the matrix. They can do this by counting how many times the target element flashes. As a result, the brain response to a flash of a row or column containing the target character is different from the brain response to other rows and columns. After a sequence of stimuli, in which all rows and columns are flashed several times, a classifier can be trained to distinguish between brain responses to attended and unattended characters. Thus, subjects are able to select elements from the matrix by directing their attention to this element.

The visual speller that we are going to build in this example will be a 3x3 matrix containing the numbers 1 to 9.

Parts of this example

This example consists of five parts. In each consecutive step, we will use another feature of BrainStream to increase the performance of the speller.