The Behringer X-Air XR18 is used in labs that have several sound sources and sinks. 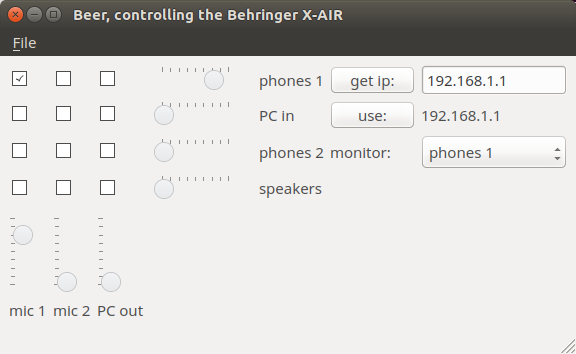 Beer, control interface for the Behringer

You can either use the 'X-AIR-Edit' software that gives full control of the Behringer or the simplified 'Beer' software.

Beer shows the sources (microphone 1, microphone 2, PC output) where the sound comes from on the bottom and the sinks (phones 1, PC input, phones 2, speakers, monitor) where the sound goes to on the right. The grid in between shows what is connected to what.

Press 'get ip' to query where the Behringer is. Then press 'use' to use this device. You can also type the address manually if you want, which is unlikely.

There are a lot of ways the Behringer XR 18 can be connected. We prefer the first one.

Here described is a connection with the Kensington UH3000-e hub.

Make sure the connection of the Behringer is set to 'DHCP Server'. If it is not, use the second connection method to change the setting. 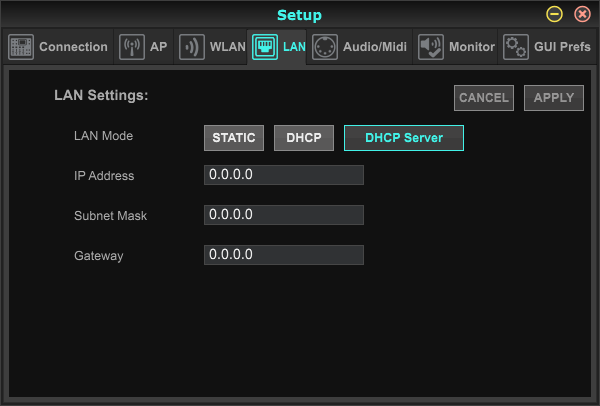 Now connect the Kensington hub to a USB port on the computer. Preferably use a USB3 port (these ports are marked 'ss' and/or have a blue inside like the ports on the hub itself). Connect the Kensington hub to the Behringer XR-18 with an ethernet (RJ45/8p8c) cable. Use the port that is marked 'remote' on the Behringer. The cable will also fit in the port marked 'ultranet' but this will not do. 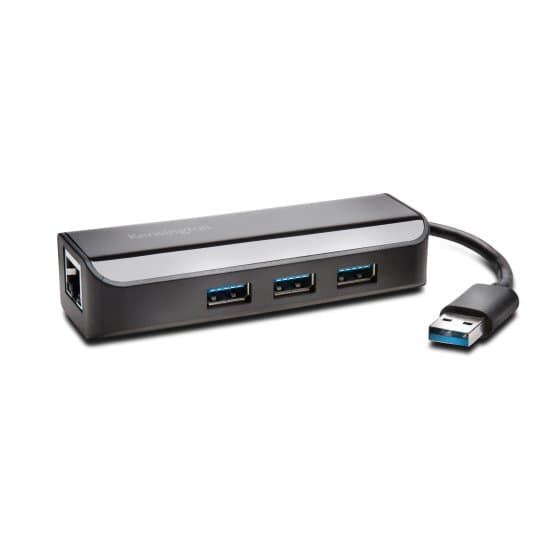 Additionally you may want to connect the hub with the Behringer with a USB2-AB cable. This is not necessary for controlling the Behringer, but additional functionality becomes available if you do.

Make sure the switch on the Behringer is set to 'ethernet'.

Your can now start the software.

Connect both your computer and the XR-18 to a ethernet (RJ45/8p8c) wall outlet. Make sure the connection of the Behringer is set to 'DHCP'. The is the default. The XR-18 will revert to this setting if you press the reset button for 2 seconds.

Make sure the switch on the Behringer is set to 'ethernet'.

Your can now start the software.